A normal morning. Got up late as usual. Nothing much to be done. Pari had to be taken care. Thats normal too. But it all changed after a phone call from my aunt.

My aunt and family lives just a few blocks away.They were planning for a vacation to Kerala and so just wanted to visit us before the trip. We go to hers’ atleast once a week, have dinner and come back. They are like family, so homely.. And now that they were coming something had to be made.

I did the cleaning in a jiffy. All that I had in the fridge was some milk bread which was lying for almost a week. I panicked and called Sayf’s SIL. She asked me to try Bread Pudding. The way she said made it very simple. “…So you beat the egg, milk and sugar together, soak the bread in that for a couple of hrs, and then bake it. Done..” Well, there wasn’t anytime to think and so decided to make it.

The result. AWESOME!! There was a subtle, not-so-sweet,still adorable pudding… 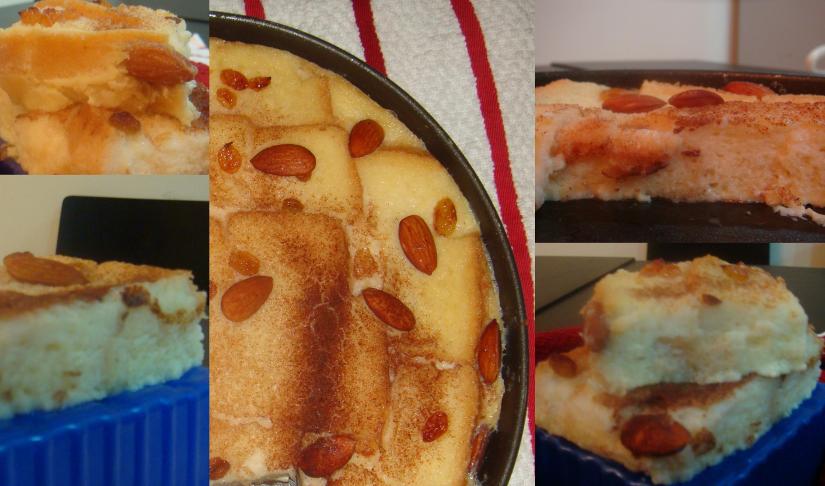 Sugar – 3 to 4 Tbsp. Use more if you would like it to be very sweet

Bread – I used 6 slices ,each of them cut into 9 square pieces. But the shape does not matter, though it would be easier to cut the pudding if they are square pieces. However the slices should be enough to form 2 to 3 layers on your baking tray.

1. Beat the eggs, milk and sugar together.

2. Layer the bread on the buttered baking tray. 2 to 3 layers should suffice.

3. Pour the mix over the bread. It should be enough to soak the bread layers.

4. Fry the raisins and almonds in butter and place over the top layer. Use walnuts or cashew nuts if you like.

5. Sprinkle some cinnamon powder on top

8. Keep it still for another 1-2 hrs to cool down. It is important that you serve only after the pudding is cooled down because if not set it would come like a dough. It given time to cool down, it could be cut like a cake.

If no nuts available, you could also roast some corn flakes in honey and sprinkle on top once the pudding is done.

Note: The bread should be stale or the pudding would be mushy mushy..